History of The Tuscaloosa Horns 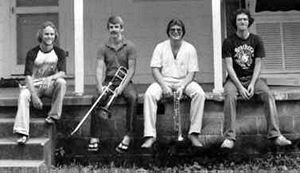 Traditionally, Tuscaloosa is known for creating champions, whether it be in athletics, academics, or the arts.  The Tuscaloosa Horns are no exception. The atmosphere and scenery on the University of Alabama campus, along with certain professor leadership, all influenced the sound and success of the Tuscaloosa Horns as they began to evolve.

Formed in 1979 in the studios of Tuscaloosa and Birmingham, a musical adventure began and the journey continues into the new millennium.

It started when a rock and roll "horn band," which included trombonist Ben McCoy, recorded a demo record at a landmark studio "The Sound of Birmingham." The recording engineer and owner of the studio, Don Mosely, asked Ben if he wrote music for jingles. Ben lied and said yes. Subsequently with the success of the band's demo recording Don Mosely called Ben to write a horn arrangement and contract a horn section for an upcoming jingle date. Ben, an arranging student of Steve Sample at the University of Alabama, decided to use his current horn section from the great local funk band, "Moon Pie," which used a three horn configuration -- Tom Stipe (trumpet), Rial Gallagher (alto sax) and Ben, himself on trombone.

Due to graduation, etc. and the need for a more powerful sound, Ben restructured the section to include two (2) trumpets, tenor sax and trombone. Mart Avant (trumpet), Chris Gordon (trumpet) and Steve Black (tenor sax) were brought in, and along with Ben decided to form what is now known as The Tuscaloosa Horns. Ben also dove into the unknown world of commercial horn arranging and forged ahead. The session was a success and the journey officially started.

Mart Avant, another studio arranging major at the University, soon began writing for sessions along with Ben. Soon, so did Chris, yet another arranging major at U. of A. The engagements became larger, more complex, and more important, reaching past the realm of the traditional product "jingle." We began to write bigger arrangements for "image pieces", news opening, advertising bumpers, station ID's. These arrangements became orchestral in nature, employing the services of large string sections, additional brass instruments, woodwinds, and percussion. Our services also began to widen to include work at other prestigious studios in the area including: Bates Studios, Boutwell Recording Studios, Sound of Birmingham, Shamblin Sound, The Ice House, Prestige Studios, and Airwave Production Group.

In 1984, three things occurred that would alter the future of THE TUSCALOOSA HORNS. Ben McCoy had graduated and decided to move home to Chicago, Illinois. Also, the Yamaha DX-7 synthesizer hit the market dawning the age of MIDI studio production techniques. Finally, the Birmingham-Jefferson Civic Center was constructed in Birmingham. These three seemingly unrelated occurrences would reshape our future. By 1985, studio work in the area suddenly dried up, practically overnight. Few live musicians were hired for the "sweetening" of tracks. The only remaining players still to work regularly in the area were rhythm section players and an occasional sax soloist. Yet, with the addition of the Civic Center to the City of Birmingham, there was now a modern arena for concert promoters to use for "live concerts". When these promoters began to book greater numbers of "name" road acts in the area, they were faced with fulfilling the demands of contract "riders" which included local musicians to be hired from the area to augment the staged arrangements. THE TUSCALOOSA HORNS were the recognized horn unit in the area and got the "nod." Our first "live" concert with a recognized name was B. J. Thomas. In 1988, an additional venue was added to the Birmingham area. Oak Mountain Amphitheater was built and with it even more artists came to town. Mart Avant became the spiritual leader of THE TUSCALOOSA HORNS and its primary contracting agent. In the first year of operation at Oak Mountain, promoters brought in a Motown Review - the TNT Tour. This was the Temptations and the Four Tops. The TNT show had been running for two years, ever since the debut of the Temptations 25th anniversary album, with their single "Standing On The Top." The concert was a huge success and an artistic "marriage made in heaven." THE TUSCALOOSA HORNS and the sounds of Motown artists would be linked from this time on. We have been with Motown artists on the road in towns all over the United States. We have played concerts attended by hundreds or over a hundred thousand. We have also been the primary horn section for the Temptations in the Southeast for 20 years! We hope for fifty more!

THE TUSCALOOSA HORNS were inducted into the Alabama Music Hall of Fame in January 1999 and listed on the Music Achievers list. Now, in 2010, the network of musicians that THE TUSCALOOSA HORNS are associated with has grown exponentially since that first recording session. Finally, we are venturing off into recording for ourselves, instead of others. The T-Horns CD Project is in the creation stage and in like the tradition we've all grown up with, we will not stop until it is completed, like champions.

"Have a goal," he told them. "And to reach that goal you better have a plan. Have a plan that you believe in so strongly you'll never compromise."